This is such a special place for me, my first encounter was in my school years when we came to this part of Dorset on a Geography trip to study the landscape.  There are many spectacular points on the South West's Jurassic coastline but the stretch with Durdle Door, Man O'War bay and Lulworth Cove and an extraordinary site known as the Lulworth Crumple are amongst the biggest of tourist attractions and coach loads of people visit all year round.  Due to tectonic forces over millions of years ago we have been given a glimpse of layers of rock from underneath the Earths surface that provide an insight into 80 million years worth of Earths geographical history. 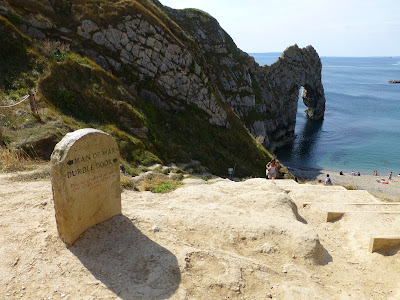 From that Geography trip my friends and I totally fell in love with the area and spent the three summers following our GCSE's taking camping holidays down there.  Oh my goodness, swimming, sunbathing, walking over the cliff paths, climbing over rocks, watching sunsets, drinking too much and laughing a lot.  I think all of us at some point or other will have swum out to these rocks here which have an official name but to us will always be known as 'Soddery'. 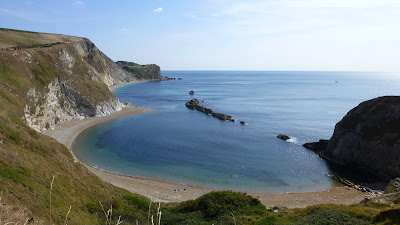 One of the things that I adore about spending time on any beach is the age of it. The word ancient doesn't cover it.  Like trying to imagine the eternity of Space, I think the age of our planet is almost as hard to put into perspective.  Being in/on/amongst geographical landmarks triggers that mindset for me; the enjoyable contemplation of vastness.  Living in an island country and in Somerset the coastline is close and accessible, after just a 45 minute drive I can breath in our sensational sea air absorb the circularity of the waves, the impact of time and the elements and the feeling of being on the edge of something overwhelmingly bigger than me.

Wednesday 5th September and I think it might have been one of the last really warm days of the summer.  I was so excited to be there. The views were all so familiar but I hadn't visited for some time.  I wish wish wish I had taken swimwear!  The water was so clear and the day so hot, I compromised with settling at the waters edge with my legs stretched out into the lapping waves and then a paddle slipping and sinking into the shelves of small pebbles that make up the cove underneath Durdle Door.  This painting was worked from sketches and photographs taken on the way back up where I settled on a big outcrop of rock looking down onto Man o'war bay. One of the most peaceful spots on the cliff path I sat and took in the view, felt the breeze and salt air on my skin and listened to the waves. 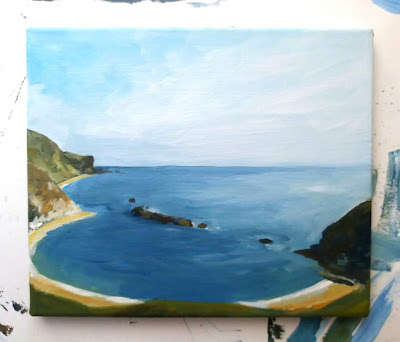 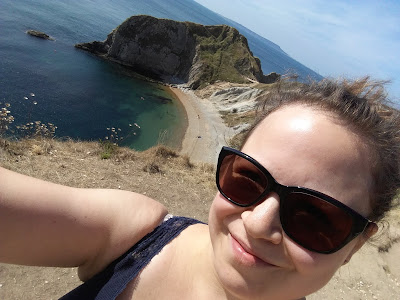 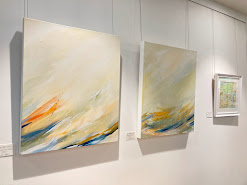 Time and Tide at The Octagon Theatre Gallery Space 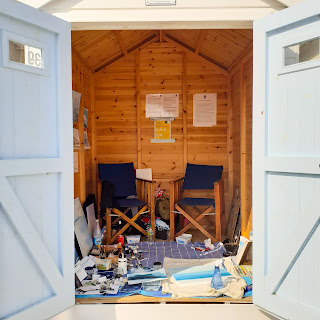